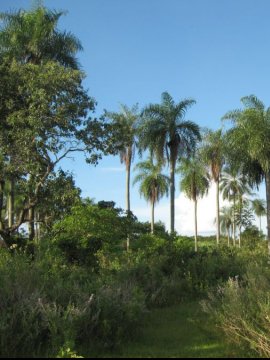 For the real estate buyer from German-speaking countries (Germany, Austria, Switzerland) it should be clear that he can only buy land with title or, in the case of municipal land, enter into a lease agreement for a period of 99 years, which he can also sell again.

INDERT land (IBR or Fiscal land) may absolutely NOT be sold to a foreigner. If contracts are nevertheless made on it, they are VOID. (Void means: you can throw the contract in the trash, because it is "INVALID" and not legally binding. In addition, this possibly even contains a punishable act - you should keep your hands off it).

Only Paraguayan citizens can, under certain circumstances, be granted land by the state, which they have been cultivating for a long time, and have a corresponding title of ownership issued.

The state awards its native citizens a home and farm as a basis for providing for the family. At the same time, the land is subject to a 10-year sale bid. During these 10 years, the Paraguayan cannot sell his land, which now has a title of ownership (only when a title is first issued), to foreigners and thus it cannot be signed over to foreigners in the Land Registry. Thus, it also cannot change ownership to a foreigner.
The Paraguayan can sell land to a foreigner only after being the owner of the property title for 10 years - not before. If, nevertheless, contracts are made about it, they are IMPOSSIBLE (That is, UNVALID from the beginning).

Unfortunately, the Paraguayans themselves (often) do not know this and want to sell their land and foreigners (e.g. Germans) enter into a NOT VALID contract, which, as already mentioned above, is UN VALID. A lawsuit would also be pointless in this regard - rather self-harming.


Unfortunately, there are always cases in which such sales take place. Be it due to fraud or the ignorance of lawyers or notaries. But this does not matter: Not valid means in plain language: INVALID (and that from the beginning).

In practice, such things are usually circumvented by private contracts. But these only hold as soon as both parties adhere to them until the expiration of the 10 years and after that the transfer of the title of ownership takes place.
But what happens if the seller does not adhere to it, he has died and the heirs do not want to adhere to it afterwards?

Imagine you have concluded such an IMPORTANT private contract that after the 10-year lock-up period, the title of ownership is transferred to you. In "good faith" you have built on this land a house with pool and much more with almost all your assets and also make a living, your life.
The contracting party wanted to adhere to this contract and after this 10 year blocking period transfer this land to you along with title to the property, but he has now passed away. Among the heirs there is a competent lawyer who knows that this contract is IMPORTANT and insists on the inheritance. Are you then of the opinion that you would be justified if you had entered into a NON-IMPORTANT contract?
The fact is: the heirs will get everything. Even your newly built house with pool, etc. You will not get anything in return - ANYTHING!

One has only concluded a "private" contract through a lawyer or at the notary, but it is NOTORIOUS and therefore does not comply with the law. This contract can be contested at any time. And since one knows that NOT VALID contracts are INVALID from the beginning, one will never be able to get RIGHT as a buyer of a void contract. This is not different in Germany.

2nd example: you buy again a land by private contract without being registered in the registry and of course you don't get a title of ownership - no title deed. So the seller could still sell this land to others. To a local person he can sell it, which again pushes you off the land. All the law is on the side of the Paraguayan. You have no chance to get justice.

Under Paraguayan law, no one can make binding dispositions for others, such as legal heirs, beyond their death.

By the way, "Fiscal" land is the term used for those properties that do not yet have land titles. Here, eligible Paraguayans can apply to the INDERT to have a title issued in their name.

I myself recommend only the sale over competent real estate brokers, who understand also from the right in Paraguay something to be able to be taken even in adhesion, keep to it and which only with a translator, who is admitted also with the highest court in Paraguay, with the notary everything word for word and also in writing translates like also with its signature and stamp for its translations for it clings - that is obligation!
In order to be on the legally safe side, it is not recommended to do without a few euros in order not to experience a nasty surprise.

IMPORTANT!! - Procedure of a real estate purchase in Paraguay:

When you find a property you like and want to buy, you go to the Escribania (notary), if it has a title, and make a private contract in which the seller agrees to sell the property and the buyer to buy and pay for it. To buy a property in Paraguay a valid passport is sufficient!
But before the transfer of the title is completed, everything is checked beforehand and various offices are queried, so there will be no problems.
If everything is in order, the title can be transferred to the new owner, provided that he has also paid in full. If something is not in order, then this must be settled beforehand to enable the transfer of the title. If it cannot be settled, then no purchase and sale can take place.
Buyer and seller then seal again by signature, so that the title is transferred to the new owner.

Paraguay-XXL offers information as well as real estate in Paraguay.